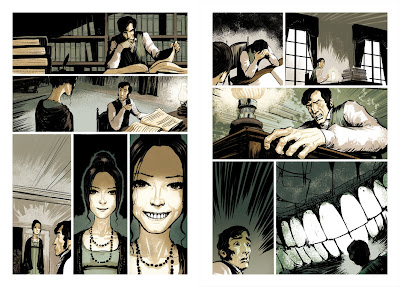 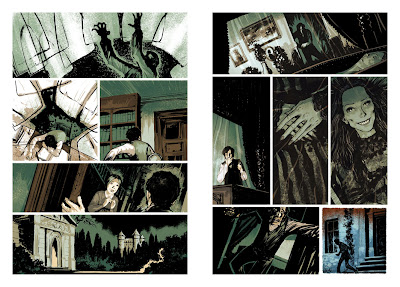 Just finished this job for Graphic Classics' second collection of Poe adaptations, due out on August 1st 2011. Needless to say, it's the kind of source material I've been dying to be let loose on, this particular tale concerning a monomaniacal French aristocrat becoming morbidly obsessed with his ill fiancée's teeth.

On reading the section of the script illustrated above, I'll admit to succumbing to a good giggle. The guy's haunted by visions of The Teeth, see. He covets and clutches at them. There's a big potential pitfall here, because it's all a bit silly, but needs to be dark and somewhat horrific as well (or preferably instead). Whether I've nailed it is up to you, excellent, lovely and discerning human being that you are ;-)

The actual drawing of the story was a game of two halves. I've been long beholden to Bernie Wrightson's luscious inkwork on comics such as this, and have been enjoying a long running re-primer in his back catalogue courtesy of Peter Richardson's fab Cloud 109 blog, so it's little wonder that this started out as an unconscious homage. A poor man's homage, admittedly - a couple of weeks into the job I realised what was happening, and overhauled the look to more genuinely reflect the direction in which my work's heading these days. So it's ended up as a combination of me on a good day and Wrightson on a bad day. Does it work? Again, that's for you to decide, you brilliant thing you, etc etc etc.
Posted by Nelson Evergreen at 2:44 AM

Looks fabulous Nelson. Great composition and I love the effect around the lamp.

I've never read this particular one despite having a two collections knocking about my house. I'll need to dig it out!

Glad you like it Craig. It's good that it's a lesser known one - I'd hate to have had to follow something like Wrightson's "The Black Cat"!

I'm not familiar with the source story but I'm looking forward to seeing your adaptation. Especially like those panels where the guy is surrounded by teeth! You've really captured that feverish, disturbed feeling of Poe's work.

That Poe bloke's a proper nutter isn't he? 'Thought you might appreciate the teeth thing, Dave!

I've spent the last 8-1/2 months putting together a massive POE blog project, attempting to assemble every POE comics adaptations I can find in chronological sequence, starting in 1944.

Wow Henry - what a project!

I love how the '67 version is titled 'Berenice!' rather than boring old 'Berenice', heh heh. Lovely art too.